From Wargarous to Monocles: An Interview with EJ Patten in 4 Parts

If you’ve read about E.J. Patten and his debut novel Return to Exile (see these links for two great recent interviews at Smack-dab-in-the-middle and Beanstalks & Bookends and my review of Return to Exile on my blog), then you know you are dealing with a trapster (a man who is fascinated by traps), a comedian, and both a deranged and incredibly talented writer. His influences include Tolkien, Weis and Hickman’s Dragonlance Series, Douglas Adams, and H.P.Lovecraft. When I read Return to Exile -after my son read it and loved it and said I had to read it or he would disown me (I told him that was my job to say things like that but he simply scoffed and pressed the book deeper into my hands.) - I will tell you I was hooked from page one. I was also introduced to one of my favorite characters I’ve encountered in a long time, one Phineas T. Pimiscule, who is right out of Robert E. Howard’s Solomon Kane stories - off the page and in the flesh but updated with a modern sensibility and a monocle. Any story that can make you squirm then laugh, then squirm and check under the bed and in the closet for monsters is a story worth reading again and worth spreading the word about.

So I asked E.J. Patten if I could interview him and I promised him I would not ask questions that had been asked of him before – that I would try to challenge him with something new and fresh and in return he would answer in one of his two voices (serious or funny as all hell) or an interesting combination of the two, and he could ask me questions about my work as he saw fit. This made me a bit nervous. I mean he did come up with some freaky scary creatures in a world filled with traps, tentacles, sharp teeth, and poisonous clouds of doom.

So there is dark and light to the man just as there is in his debut novel. Both are highly compelling to middle grade readers (and readers like me). I’m going to dive into the dark first and see where E.J. takes us.

First, before going any further, read this post from E.J.’s blog from last Halloween. 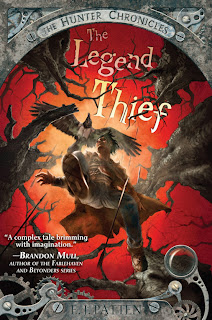 Then come back and read on. (And if you’re not a follower of E.J.’s blog go ahead and become one. The second book in the series, The Legend Thief, is coming out in the fall and now’s a good time to get advanced notice of the artwork and storyline.)

Joe: Eric, I remembered this piece you wrote last Halloween. I had to read it a few times just to make sure it wasn’t some dark Halloween leg pulling. This was deep shit. I mean it. Disturbing and raw come to mind also. But I believe from disturbing events comes strong material and authenticity in writing. What do you think about this? Return to Exile has some darkness that makes the hairs on the back of your head tingle and your body shiver. Where does authenticity in horror come from and how does it play out in your writing?

Eric: First of all, I love this question, Joe. I was beginning to wonder if anyone had read that Halloween piece. I consider it one of the most honest and personal things I’ve ever written. Writing something like that leaves you exposed, it makes you relive the horror all over again, and once it’s summoned from the depths of wherever such memories hide, it calls all its friends and throws a killer party. Thinking back on that event brought to mind so many other horrors from that time: my mother vomiting blood all over the house, the ambulance arriving in the middle of the night, the forced move to Texas for a new job while she was still in the hospital clinging to life, the tests that determined I was stupid and needed to be put in the remedial classes, breaking down in front of everyone, the teachers mocking and paddling me, getting beat up by bullies and refusing to fight back because I thought I deserved it. Being young is hard and I have respect for anyone who survives it. The only thing harder than being young is being old and, unfortunately, survival rates are far less hopeful for such a condition.

I believe that horror, at its heart, is about the struggle to survive in the face of inescapable impossibility. Authenticity in writing—no matter the genre—must arise from familiarity with the struggle. This doesn’t mean I have to go to war to write a war story, but it does mean that I need to understand hopelessness, powerlessness, friendship, fear, and absurdity, and I need to do a lot of research and have a very good imagination.

I’m a better writer now than I was as a teen not because my prose have improved or I have better ideas—I was far more imaginative as a teen. I’m better now because I’ve suffered more, I’ve loved more, I’ve lost more, and I understand more. Life for most of us is full of darkness, confusion, and pain, and yet we struggle on anyway because when we reach those occasional joy-filled peaks, the view is that much sweeter.

Survival is the great universal theme. Horror arises from those things that threaten our survival, figuratively or literally: a creature seeking to kill us, a boy who will go to any lengths to ruin our reputation, a journey into the dangerous and unknown, a drug that makes our loved ones forget us. In each of these, life, or a way of life, is on the line. I could take any of these stories and write them as horror, or something else. To make it horror, I would need not only a threat to survival, but also an inescapable impossibility. I would need to remove normal limits around what is socially acceptable (like Hannibal Lector’s complete disregard for proper table manners), or even possible (like the existence of monsters in Return to Exile), and launch my characters into the unknown (like Cid moving in with Lefty in Open Wounds), with no hope of escape unless they defeat or pass through the horror (like Bella falling in love with Edward in Twilight…okay, not like that, but you get the idea). Horror pops up in all genres from time to time, but to write a horror book you need not just horrific moments, but also a horrific plot—a story about the struggle to survive in the face of inescapable impossibilities. The character’s reaction to their situation creates authenticity and knowing how characters should react comes from our own personal psychosis.

Now, I believe I get to ask you a question. You say that disturbing events lead to strong material and authenticity, and I agree. Is the inverse also true? Do joyful events lead to weak material and deception? Also, who would win in a sword fight between Cid and Luke Skywalker? I’m talking pure technical merit, no Force powers.

Joe: There is a lot to unpack from your initial response, dark events and images unraveling one after the other. It gives more texture to your Halloween story though I felt its depth when I read it even without the additional details. It’s amazing how writing about events like this can bring past memories back in such a visceral way. For me that’s why memoir is so hard. Writing fiction disguises facts even if the emotions are true to the events. But in memoir I’m so damned naked it’s frightening. I’ll come back to this as I think there’s more to discuss. But for now I’ll move on to your question.

Do joyful events lead to weak material and deception? I’m asking myself to buy some time while I think about it.

I don’t think it’s about whether or not events are disturbing or joyful but how powerful the events are for us that matter. Disturbing as a word has a different connotation for me than uncomfortable.  But disturbing and joyful seem to me to have similar power. I believe the stronger the feelings towards the event someone has, whether the feelings are positive or negative, the stronger the material and the authenticity. Watching the birth of my son was one of the most joyful (and harrowing) experiences of my life. The images of him entering into the world and hearing his first cry amidst the sea of childbirth blood and amniotic fluid are etched inside my brain. Knowing that joy helps me to write more authentically about the joys my characters experience, whether it’s childbirth, or scoring the winning try at a rugby tournament, or having sex for the first time. Okay, don’t think too closely about the grouping of those three events.

As for Luke vs. Cid there’s a number of answers to that. If Luke gets to use a light saber and Cid has to use a small sword (what we could call a dueling épée) then Cid gets his ass kicked because light saber trumps steel. If Luke uses a broadsword (one handed or two) made of steel – which is what his training in light saber would most apply to - and Cid uses a small sword I’d vote for Cid because the point is quicker than the edge and the broadsword is more unwieldy than the épée. That and Cid wouldn’t hesitate to draw blood while I think Luke Skywalker would. The best fight would be rapier against rapier. With both Luke and Cid’s training being theatrical I’d still give Cid the edge, though just barely because he trained with steel and Luke trained with a blue screen.

Now let’s go back to you. You say survival is the great universal theme and your personal tale of survival - of which I’ve had only glimpses from what you’ve written on your blog, in interviews and earlier here – has been strewn with hardship and your share of darkness. Tell me about your survival as a writer. What event or events helped you transition to maturity so that you could call yourself writer with a capital W?

...
Come back for the next three Thursdays as EJ and I go back and forth picking up the threads of the interview throughout the month of June. In the mean time the give-away at the end of the interview (closing date for entry is July 2 and winner will be announced Friday, July 6) will be a critique of up to 10 pages of manuscript by EJ himself. (I want in on that.) You’ll get one entry for each of the following: mention the interview on Facebook; tweet about the interview on twitter; and/or become a follower of Gotteenfiction.

By the way... if you haven't read Return to Exile here's a link to Indie-Bound.
- Joe
Posted by Got Teen Fiction? at 7:55 PM