From Wargarous to Monocles: An Interview with EJ Patten, Part IV of IV 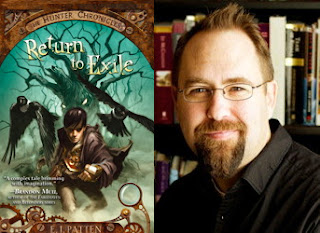 Welcome back to the fourth and final part of our epic interview with EJ Patten, author of Return to Exile and the forthcoming The Legend Thief, the first two books in The Hunter Chronicles. To read the first three parts of this interview click on the following links: Part I, Part II, Part III.

Joe - Now here's your last question. We've spent a month of Thursdays together learning about your delight in Ramen Noodles and Vienna Sausages. We've journeyed into some of the darkness of your life and the light. Let's end with a look at book marketing and the all important choice of an illustrator for a middle grade book.


John Rocco is a wonderful illustrator and did all the work in your book and a lot of the images on your website (all in this and the previous posts). Tell me about the process of working on your cover, of hooking up with Rocco, and about how you come to envision the characters and creatures in your books.

Ball’s in your court for the last round…

Eric - Ha! This may be my shortest answer yet. John is stupendous—truly amazing—but I’ve only had one or two email exchanges with him over the past few years, and those were around copyright issues. Surprising? It surprised me.

A few years ago, my editor, my agent, and I were going back and forth on who should do the artwork for the series. Several major names were thrown around. Then, one day, my agent got a call from Simon & Schuster Children’s publisher, Justin Chanda. Justin is one of the biggest champions for The Hunter Chronicles at S&S, which is good considering that he runs several of the children’s imprints, including mine. Justin told us that he’d contacted John about the project, and that he needed our buy off on the terms. For those of you who don’t know, John is the artist behind the Percy Jackson series and most of Rick Riordan’s other books. John’s also a Caldecott honoree for his own picture book, Blackout.

In other words, this was a big deal. 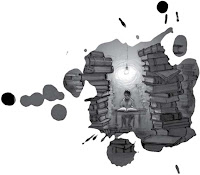 For a debut author, there are only a few things that really sell a book (in order of importance):

1.    The cover
2.   The summary on the cover flap
3.   The first page
4.   Word of mouth (I would rank this higher since it’s really the biggest boost a book can get, but you need a critical mass of fans before this takes effect, and you need the first three things to get that critical mass)
5.    Marketing and PR (including reviews, awards, etc.)

John is one of the biggest names in middle grade cover art and he created amazing covers for Return to Exile and The Legend Thief.

And it had nothing to do with me.

John worked almost exclusively with Simon & Schuster art director, Laurent Linn, to create the covers and internal illustrations. My contract gave me say over who would illustrate the book (we had to mutually agree), but it didn’t give me any say whatsoever over the finished product. Despite that, or maybe because of it, the artwork came out better than I could’ve imagined. I love it.

My favorite illustration is of Phineas facing down the Jack. It moves me, that tiny figure standing in front of that terrible creature. It so perfectly captures Phineas’s sacrifice and the scale of the difficulties he faces in order to protect Sky. It’s brilliant.

I’ve tried my hand at oil painting and drawing. I suck. The images in my mind come through words, not colors, shades, and lines. Because I tried and failed, I can truly appreciate just how talented artists like John Rocco and Laurent Linn really are. They have so much to do with a books success, and, like the unsung editors and agents out there, they get far too little credit for their contribution.

So, I think that’s it. Thanks for the interview, Joe, and good luck with the WWI book. I’ve always thought that of all the World Wars, that one was the first.


Joe - Thanks, Eric, for leaving me with a chuckle and a smile. Don't forget folks, if you haven't read EJ's first book Return to Exile find yourself a copy and read it before the second book in the series comes to ground on December 4, 2012. 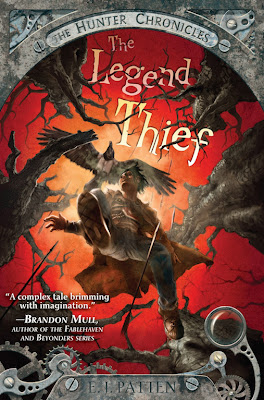 Don't forget the closing date for entry in the EJ Patten give-away is July 2 and the winner will be announced Friday, July 6. The winner will receive a critique of up to 10 pages of manuscript by EJ himself. I'm not kidding. It's the real deal.  You’ll get one entry for each of the following: mention the interview on Facebook; tweet about the interview on twitter; and/or become a follower of Gotteenfiction.
- Joe