Check out our two top picks for last week's prompt by Fire and Maggie M.  Awesome work, ladies! The prompt appears in boldface. Thanks for submitting everyone! And Happy Friday the 13th! 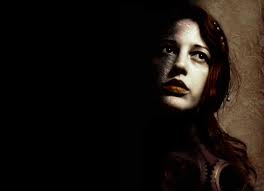 Morning offers little comfort after a night of sheer terror. I want to pretend that the slaughter and senseless deaths are a dream but the silvery bloodstains on my hands tell a different story. Exhausted, I remove my breastplate and tuck that and my saber away.

While my brother sleeps, still safely hidden, I scrub myself clean. Dear, sweet, Jake, only five years old could never comprehend that for us to survive, I will fight again tonight.

I don’t know why I bothered washing the blood off; it might as well have been stained on my skin. My breast plates stained and damaged covered with senseless deaths and pointless battles. How long would this continue before I got a break?

“Andy?” Jake wiped the sleep from his eyes.

“Hello bug.” I wiped my hands and kneeled next to him. He found his way into my arms closing his eyes once again but not sleeping.


How was I supposed to tell him what I was really doing out there, how I’d killed for our survival? I closed my eyes fighting back the night terrors, the constant haunting of not knowing if tonight is your last night. I knew the time would come when I would have to tell him the truth.

“Don’t worry bug, I’ll tell you one day.” I brushed my hand down his head controlling my breathing and the rapid speed of my heart. “It will all make sense one day I promise."
Five years old and so unaware of what is really out there of what is really after us. For us to survive I would have to fight again tonight, I would have to continue fighting. I watched the moon as it rose to the top of the sky. It was a full moon like tonight’s that it all began.


Jake startled me when he emerged from his secret compartment of our cave. He squinted his eyes against the morning light streaming in through a series of cracks in our stone ceiling.


"There's my Jakey," I said as I dried my aching hands. "Did you have sweet dreams?"


I asked him this every morning so I could begin to detox my brain of the misery from the previous night. But this morning something was different about Jake. His eyes were different which are normally a sky blue--if you're lucky enough to see the sky through the sick green fog that usually hovers over us. It appeared that his eyes have been drained of color and replaced with silvery liquid lead. I gasped. They were here last night. He is one of them!


"How did this happen?" I started to walk backwards toward where I hid my saber. But wait. This is my little brother who I've protected for months and months. How could I ever hurt him even if he is one of them?


Jake took a step closer and I had to fight my survival instincts. Why has my own brother become my enemy?