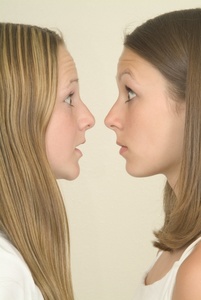 Thanks to everyone who entered their stories for the picture above. They were fun to read. One stood out, so congrats to Zoe Temco for this terrific entry!


“You.”
“You.”
The two girls continued to stare at each other, faces inches apart. Their breathing was audible over the din of slamming lockers and teens running to class.
Amy was the first to speak, her chest rising and falling with her quick breaths. “You did it.” Her brown eyes were moist. She still felt wounded and unconfident, but mostly, she felt alone.
Beth was still wide eyed, not understanding Amy’s remark. But as the realization dawned on her, she felt like a deer caught in headlights, or child caught snatching from the cookie jar. Her voice shook as she spoke. “Yes, I did.”
Posted by Got Teen Fiction? at 4:30 AM