GOT AUTHORS? An interview with Roseanne Parry 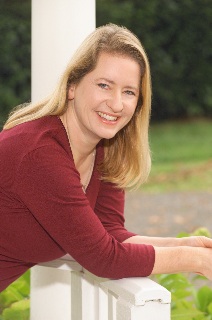 Today we have the privilege of featuring Roseanne Parry, author of the picture book, Daddy's Home and the award-winning novels, Heart of a Shepherd and Second Fiddle.

Roseanne has offered to give away two (yes, TWO) paperback copies of Second Fiddle.

The winner will be drawn on April 24th. Good luck and thanks for spreading the word!

And now, our interview with Roseanne:

1.   Any advice for writers starting out?
In the 10 years before I had books under contract, I made up my mind to pick three contests to enter or grants to apply for each year. It helped me think of myself as a professional writer and got me in the practice of meeting deadlines and putting my writing in a professional format. Eventually I managed to win a few of the contests, and when I was awarded a work-in-progress grant from Oregon Literary Arts, I knew I was on my way. I started looking for agents at that point and signed with Stephen Fraser at the Jennifer DiChiara Literary Agency a few months later.

2.  Is Second Fiddle auto-biographical in any way?
None of the events from the book are in my life, but I did play the violin when I was 14. I stopped for many years but returned to it when I started writing the book to get my head in Jody’s character. My youngest two girls play piano and violin and over the course of writing the book they became old enough to play duets and trios with me. I love making music with them and they joy of it did much to inform my understanding about how Jody feels about playing in the trio with her friends, Vivian and Giselle.
I never ran away to a foreign country with my friends though. Even now I tell my parents if I’m traveling out of the state. :-)

3. What’s the best email or review you’ve ever received from a teen reader?
It wasn’t a review, but I had a conversation with a reader recently who said that Jody in Second Fiddle had inspired her to practice her piano every day instead of fighting with her mom about it and practicing only two or three times a week. She’d been playing piano all her life and although she loved music, she wasn’t sure the piano was really the right instrument for her. We had a nice chat about how a musician finds her voice and style of music. She felt like she was ready to make her own decisions about what she wanted from her music, and talking about the book helped her have that conversation with her mom. I LOVE that about books. I think the conversation that happens in a family because of the book is far more important than anything that is actually in the book.

4. Did your children, spouse or significant other read your novel? Their reactions?
My husband never reads my work when it’s in progress. If he reads it when it’s done, he never tells me what he thinks of it. And in return I never comment on his electrical design when I see a building he’s worked on. :-) My children, on the other hand, read my work all the time and sometimes I have to go hunting for yesterday’s pages under their beds amid the yucky socks. Fortunately for me, my children are all better spellers than me, so I am very grateful for their frequent help with proofreading.

5. What is the thing that has surprised you most about publication?
My favorite thing about the publication of Second Fiddle is learning how many people in the book business are also musicians. My agent plays the piano and sings, my editor is a drummer in a rock band. All three of us remembered how being a musician as a teenager was empowering and helped us find a group of musician friends.
My favorite memory from touring with the book was the afternoon I spent at the children’s room of the New York Public Library. I did a children’s event in which I played duets with  some violin players who were 5 and 7 years old! It was such fun and a huge honor to be a part of a young musician’s very first public performance! My editor stopped by with his guitar and after the event the two of us found a quiet corner of the children’s room and he taught me how to do improv. I’d  never tried it before, but it was such fun.
Since then, I’ve found a session in Portland that takes beginners. I go once a week and learn Irish jigs and reels with no written music, just listening and chiming in. It has proved very helpful in my next book which is about a family that makes Irish music together.

If you are in the Portland, Oregon area and would like to meet Roseanne, she is doing an event at Powell's Books on April 13th.


Book Fan Friday is a workshop for kids 10 to 18 years old who love to write. This month, Stasia Ward Kehoe (Audition) and Rosanne Parry (Second Fiddle) collaborate with a group of accomplished young singers and dancers to present From Stage to Page: Writing about the Arts, a discussion about how to make arts a compelling story.
Friday, April 13th @ 4:30pm Powell's Books at Cedar Hills Crossing
3415 SW Cedar Hills Blvd. (800) 878-7323
For more on Roseanne, visit her website http://www.rosanneparry.com/ or to learn more about States on Pages go to their website http://www.stagesonpages.com/ .
Posted by Got Teen Fiction? at 5:29 AM