Thanks again, got teen fiction writers for all your submissions.
Our winner today is Dave S.  Nice work! 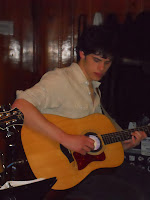 One of the hottest up and coming local bands, Sisco Lane, needed a lead guitarist. I'd been preparing for this for weeks, months--to the point of blisters.
Auditions were today.
Now.
Teddy Sisco, the bassist and leader of the band, jotted a few notes after the last guy. He had totally owned his song choice.
The competition was legit and I was just as good as any of the other guys. The slight advantage they had over me was that none of them made out with Vicky last night. Vicky, now seated next to Teddy, had failed to mention that the two of them were going out.
"Dennis, you're up. Let's hear what you got," Teddy said with a strange edge in his voice. It was as if he was daring me to blow it.
I grabbed my guitar and took a seat up front. Vicky shot me a seriously flirty smile and an icy panic gripped me. For the first time this afternoon, Teddy seemed annoyed, impatient. Shit. Did he know about last night or were the auditions just starting to wear on him?
I strummed the first chord, closed my eyes and...
poured my heart and soul into it and didn't make a single mistake. The rock gods were watching over me that day and then Teddy spoke.
"That was excellent," he said.
I felt such relief it was like I could actually breathe again. All I could do was nod in appreciation.
"But this whole situation is not going work," Teddy continued.
I stared at him incredulously.
Teddy stood up and muttered, "Vicky, you're a slut."
"What did you say?" Vicky shrieked.
Through gritted teeth, Teddy said, "I don't like you, Dennis, but you're hired." Then he slowly turned around to face Vicky and he said, "Get out."
At first she didn't budge but then Teddy tipped his head toward the door and Vicky stomped away giving him and me the finger.
by Dave S.
*****

Scroll down to yesterday's interview with Amalie Howard and enter to win Bloodspell!


Scroll down to April 12th's post and enter to win Second Fiddle by Roseanne Parry!